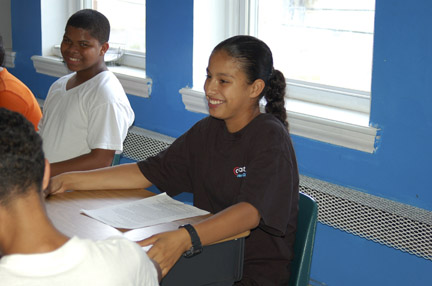 Students enjoy their time at the first Catholic Partnership Schools’ summer program, which ran for five weeks at St. Anthony of Padua in Camden in July and August. Thirty-five eighth-graders from St. Anthony, Sacred Heart, St. Joseph Pro-Cathedral and St. Cecilia participated in the program.

Catholic Partnership Schools recently concluded its first summer program, which ran for five weeks at St. Anthony of Padua in Camden, and involved students in a mix of academic, extracurricular and civic engagement.

“The students were really happy to learn and play in a safe, nurturing space,” said Elena Piperno, the Catholic Partnership Schools’ After-School and Summer Programs coordinator. “More than that, our students are receiving critical academic reinforcement that will allow them to feel confident as they begin school in September.”

Each day, the program would start with 90-minute blocks each of math and reading/writing classes, followed by lunch, and then extracurricular activities in the afternoon, which included science and art activities, museum trips, and baseball.

Students also got the opportunity to create a “My Summer Journal,” where they wrote about their activities and class trips to the Franklin Institute, Millennium Skate World or a viewing of the Pixar movie “Up.” The twice-weekly, one-hour writing classes, which were conducted by college interns in the computer lab, helped students brush up on their technological, writing, and typing skills.

Another highlight for students was a one-hour-a-week Civic Engagement course, which focused on community organizing, and how community change can be enacted.

Focusing this summer on the Clean Camden Campaign, students were treated to presentations by Candice Jefferson, assistant director of the Camden Redevelopment Agency and head of the Clean Campaign, and Yvette Velasquez, from the Department of Public Works, who spoke to students and answered questions. They also provided each student with dust pans and brooms, and trash cans to take home.

The students also drafted a proposal on anti-littering, and on how best to spread the message to their peers, to keep Camden clean.

“The students felt empowered,” said Piperno. “They understand now that change can start with them and then next, they can educate their family and friends.”

Lindsay Griendling, an intern in the program, assists teachers in helping to run lessons and educational games. “It’s been so rewarding to watch the kids grow as students and citizens,” she said.

In addition, she and another intern took charge of a computer class, where they completed the summer journals. In the students’ writings, she saw how much the program has made a difference in their lives.

“One of our students said in his journal, ‘My favorite part of the program is being able to play outside,’” she said.

“It shocked me to read that at first, and then I realized that most of these kids go home, and have to stay inside the rest of the (day) to ensure their safety.”

“At that moment I was so proud to be a part of a program that gives kids the chance to be kids.”

Joshua Dupuis, a site supervisor who helps organize and structure the program, agrees.

“Our summer program has brought something to these kids that many of them may have gone without this summer,” he said. “The breadth of experiences in just five weeks opened a lot of students’ eyes.”

The students also had positive things to say about the program.

“I liked the math and reading during the whole program,” said Julio, a sixth grader from St. Joseph Pro-Cathedral school. “It was amazing. I’m so sad it’s coming to an end. It was the most fun and best summer ever.”

Joseph, a fifth grader from Holy Name, summed up the experience with words rarely spoken during the summer, or even during the academic year: “Geometry is cool!”

Students from throughout the diocese celebrate together