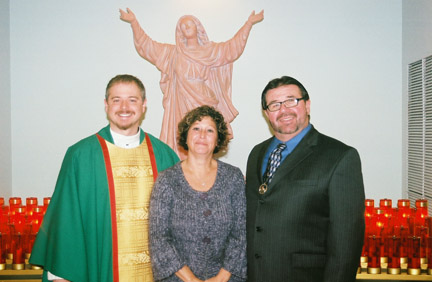 ATCO — Because of his commitment to Assumption Parish and his unwavering devotion to help others whenever he can, Bob Iuliucci has been compared to Simon the Cyrene, the man who helped Jesus carry the cross, by Father James Casadia, pastor.

“Bob lives stewardship,” Father Casadia said.  “He is director of our yearly Stations of the Cross.”  He was also chairman of the group that handled the 100th anniversary celebration of Assumption Parish earlier this year.

“Bob and others build a Jerusalem set for the Stations of the Cross months before Palm Sunday in order to present the one-hour event,” said Father Casadia. “As Simon, he is definitely typecast. Bob will go anywhere, any time where and when he is needed to help anyone.”

Assumption Parish deacon Charles McAller had been director of the Stations of the Cross pageant for 20 years but, six years ago, asked Bob to join and to become the new director. Deacon McAleer had wanted to step down after many years.

Bob lives stewardship by giving his time and talent and treasure whenever he can. And this has all been going full throttle for Bob and his wife, Mary Ann, since 1997. In fact, 1997 is a pivotal year for him. He was part of the RCIA (Rite of Christian Initiation of Adults) program and, that year, converted to Catholicism. He became friends with Assumption pastor Father Howard Muhlbaier who, Bob said, helped with his guidance through the RCIA.

“My wife’s family are lifelong members of Assumption and are involved with the parish,” Bob noted. “My daughter Jennifer went to Assumption School.” During that period before his conversion, Bob said he was more involved with township activities, such as sports. But his involvements changed almost immediately in 1997.

“I started doing work for the parish,” he explained. “I became part of the RCIA preparation team. I got involved right away.”

The one who really got him going was the late Deacon Charles Smith, who, ironically, was ordained in that pivotal year of 1997.

“We both became very close,” Bob said. “Our families became close. He started me on my journey. He had asked me if I wanted to join the RCIA team and I said yes without hesitation, although I wondered what I could contribute. Deacon Smith said I was to bring myself, my spirit. I wound up learning much from those going through the RCIA program.”

Bob and Mary Ann have been married for 33 years. “We had our marriage blessed in the Catholic Church in 1983,” Bob noted.

He also pointed out that he and his wife started devoting a good deal of their time to stewardship when they became full-time empty-nesters after their two children, Jennifer, 32, and son Robbie, 22 went out on their own.

“And Jennifer has given us two grandchildren,” said Bob.

Since 1997 Bob and Mary Ann take Communion every Saturday to the residents of the Fountains in Atco, a senior retirement home and assisted living facility, as part of the Communion prayer service.

“Deacon Smith got us started there in 1997 just to help out,” said Bob, “but soon we were alternating weekends. My wife and his wife would help. His wife Marie still helps out.”

For the past 11 years Bob and Mary Ann performed the duties of Eucharistic Ministers and his wife has spent many years in the Bereavement Ministry.

“She has a gift for that,” Bob said. “She’ll go into the home and help to plan the funeral Mass. She knows what to say.”

Mary Ann has also recently joined the RCIA team, Bob said, and has gotten heavily in stewardship, particularly since son Robbie went out on his own.

And in addition to all that he is doing, Bob is a member of the Core Team helping with the merger of St. Anthony Parish of Waterford and Blessed John XXIII of Winslow with Assumption.

“Many people in the parish have a positive attitude about stewardship but there are many who don’t understand what it is and what it does,” said Bob.

“He is a wonderful man,” said Father Casadia. “Faith is his life. He lives it. He believes in service to others. He’s always there to help.”

For more information on stewardship contact Russell Davis, Office of Stewardship, at 856-583-6102.