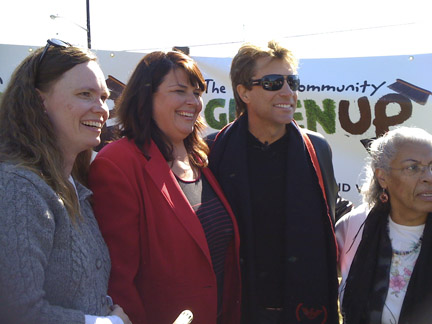 Rocker Jon Bon Jovi returned to his home state of New Jersey Monday, Oct. 19, visiting the city of Camden to show his support for community efforts to revitalize the town.

Along the way, he put down his guitar and picked up his checkbook, announcing that his Jon Bon Jovi Soul Foundation will invest in affordable housing projects with St. Joseph’s Carpenter Society and Heart of Camden. Both are affordable housing corporations in the city.

Bon Jovi visited the Lanning Square/Cooper Plaza area in Camden, where volunteers were planting shrubs and trees in the Greater Camden Partnership’s “GreenUP” program, changing vacant lots into more environmentally-friendly and people-friendly green space. The Soul Foundation had joined with the Greater Camden Partnership and other local organizations in the funding of this stabilization initiative. As well, the foundation donated playground equipment in the restoration of Rafael Cordero Molina Elementary School in North Camden.

The partnership with a well-known personality such as Bon Jovi “is extremely exciting for us,” remarked Pilar Hogan Closkey, executive director of St. Joseph’s Carpenter Society, who referenced the positive work Bon Jovi has already done with the Project Home organization in Philadelphia, which also focuses on community development. “It’s good to have a visible partner (such as Bon Jovi), to shine a spotlight on Camden and its issues.”

Helene Pierson, executive director of Heart of Camden, believes that Bon Jovi’s “rock-star power has the ability to change Camden…. He understands the people, and the needs of the community.”

Over the past 24 years, the affordable housing and community development-driven St. Joseph’s Carpenter Society has completed over 800 homes for families in the city of Camden. Heart of Camden, since 1984, has dedicated its non-profit community development corporation to supporting Camden’s historic Waterfront South area.