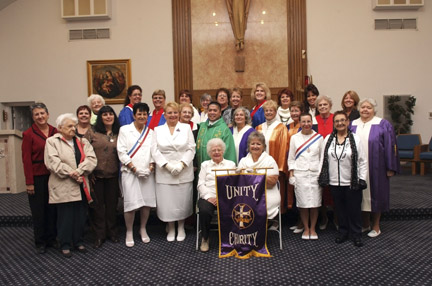 Father Victorino Coronado stands with members of Catholic Daughters of the Americas, Court Mater Creatoris 1808, for a photo following Mass Oct. 18 at Our Queen of Peace Parish, Williamstown.

WILLIAMSTOWN — The Catholic Daughters of the Americas in Our Lady of Peace Parish celebrated its 50th anniversary on Oct. 18 with a special Mass and the recitation of the rosary.

Although it’s actively involved in Our Lady of Peace Parish here, the organization also involves itself with surrounding parishes, according to Kathie Restuccio who heads the local chapter, whose official name is Court Mater Creatoris 1808.

“Our mission is to promote the Catholic faith through charity work,” she said. “We get involved with the community through prayer and church-related functions.”

The group’s motto is “Unity and Charity” and “to be helping hands where there is pain, poverty, sorrow, or sickness,” Restuccio said, noting that the “Unity and Charity,” together “share a distinctly feminine spirituality alluded to by Pope John Paul II when he spoke of the necessity of ‘feminine genius’ in the world today.”

The local chapter or court is part of one of the oldest and largest Catholic organizations in the Americas and, over the years, has gotten involved in the National Life Center baby shower, adopting seminarians, contributing to “Morality in Media,” public rosaries, and has donated more than 4,000 baptismal bibs, among other projects.

The local court contributes to such projects of the national court as Covenant House and Catholic Relief Services.

Restuccio said all Catholic women 18 and older “are encouraged to become a Catholic Daughter. The daughters pray often, work hard, have fun, and are united in charity.”

Except for July and August, meetings are held on the third Monday of the month at the Knights of Columbus hall in Williamstown. Meetings begin at 6:30 p.m. with the recitation of the rosary. For more information call Restuccio at 856-629-8547.

Advocating for life more important than ever