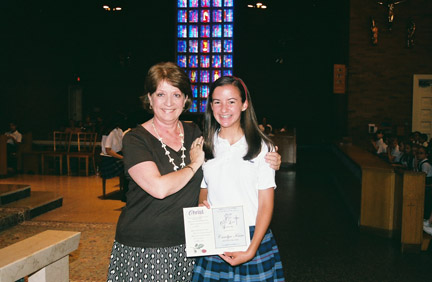 The $1,000 scholarship is awarded annually to an eighth grade student from a diocesan elementary school who will attend a Catholic high school. This fall, Carolyn will attend Camden Catholic High School, Cherry Hill.

The Dr. David T. Coghlan Young Catholic Leader Award recognizes outstanding students who use their talents in service to the church. Each of the Catholic elementary schools in the Diocese of Camden was asked to nominate an eighth grade student for the scholarship. Each of the 26 nominees are designated a 2010 Coghlan Scholar, and receives a U.S. Savings Bond.

Dr. Coghlan spent 33 years serving in the educational ministry of the Camden Diocese. He served 17 years as a teacher and administrator at Gloucester Catholic High School before moving to the Catholic School’s Office. He was the first layperson to hold the position of superintendent of schools in the Camden Diocese.

Students from throughout the diocese celebrate together