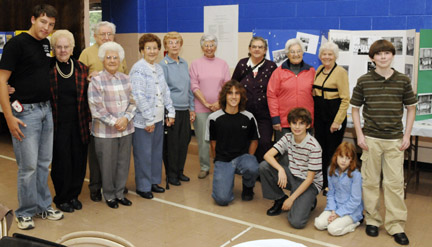 Three parish communities set to merge in the near future came together to celebrate their faith, unity and history on Saturday, Oct. 17.

Parishioners from St. John the Evangelist, Paulsboro; St. Joseph, Swedesboro; and St. Michael, Gibbstown congregated for Mass at the latter’s church, and then broke bread and shared memories during a social dinner in Guardian Angel Regional School’s gym.

St. Michael’s was formerly a mission of St. John’s, until it became a separate parish in 1940. The dinner remembered past and present priests and nuns who have served the two communities, and recognized each other’s ministries.

Individuals were given booklets detailing the history of the two parishes, and they were provided the opportunity to share stories with each other, and browse historical photographs of St. Michael’s and St. John’s.

The day “was a chance for us to remember things in the past” and look forward to the future, noted Michael Pszwaro, a member of the St. Michael’s pastoral council, who also remarked that members from St. Joseph’s choir participated during the liturgy.

This event, along with the following weekend’s ice cream social held at St. Joseph’s in Swedesboro for the three merging parishes, made for good conversation and faith-sharing among the Catholic communities. “We’re going to be one,” Pszwaro said.