“St. Francis de Sales –Let us run to Mary, and, as her little children, cast ourselves into her arms with a perfect confidence.”
Home Latest News Singing to praise Mary, and to pay the bills 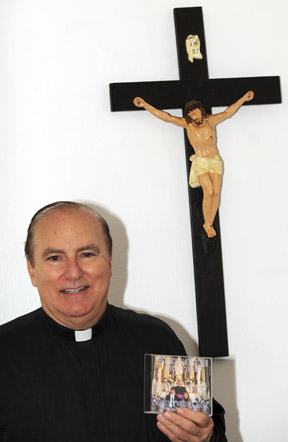 Msgr. William A. Hodge, pastor of St. Nicholas of Tolentine, holds the CD he recorded, “The Singing Monsignor: In Praise of Our Lady.” Proceeds benefit the parish.

ATLANTIC CITY — As his new album states, call him the “Singing Monsignor.”

Msgr. William A. Hodge, pastor of St. Nicholas of Tolentine here, recently went behind the microphone to produce “The Singing Monsignor: In Praise of Our Lady,” a collection of songs devoted to Mary. Recorded last June at St. Nicholas, and published by Comet-Tale Music, proceeds from the sale of the compact disc will go toward the restoration fund of the church, which Msgr. Hodge has been pastor of since 1997.

Hoover’s background includes piano and organ studies and, beginning at the age of 15, she began teaching piano, organ and voice. She attended Temple University, and she sang with Singing City choir in Philadelphia. In 1954, she began singing in the St. Nicholas Choir, and she began her duties as parish organist in 1968.

Capone, a student of Hoover’s in piano and voice for the past eight years, sings with the pastor on many of the 18 tracks, including “Ave Maria,” “Hail Holy Queen,” and “Hail Queen of Heaven.” On two tracks (“Hail Full of Grace,” and “Mother, At Your Feet is Kneeling”) he performs solo. At St. Augustine Prep, he has received the Outstanding Scholastic Achievement Award, President’s Scholastic Fitness Award, PTA Scholarship Award, and Most Outstanding Student in Class.

Msgr. Hodge showcases his solo vocals on tracks such as “Mother of Christ,” “Salve Mater Misericordiae” and “Our Lady of Fatima.”