MERCHANTVILLE — Cole, a fourth grader, said the purple bracelet helps him to remember to pray. “It’s good to move it every day,” he said with a big smile, adding that he usually moves his bracelet from one wrist to the other when he says his nighttime prayers.

Katelyn, who is in third grade, sees the bracelet as a reminder to use prayer as positive force. “When I feel angry or sad, I usually say a quick, ‘Glory be [to the father…],’” she said, glancing at her wrist.

The purple rubber bracelets were an Advent gift from Joseph Saffioti, principal at Saint Peter School in Merchantville. Saffioti was familiar with the “A Complaint-Free World” movement, started by a minister as a secular initiative in 2006, but he wanted a distinctly religious component.

“The idea is to pause before complaining or grumbling, and then to give thanks and/or praise to God for whatever the challenge is, and then switch the bracelet to the other wrist,” said Saffioti. He explained that switching wrists heightens awareness about the frequency of complaining. 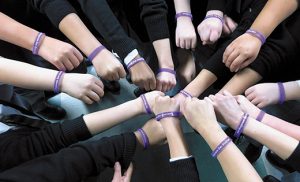 “Our problems are nothing compared to many people,” said Eden Hart, a sixth grade student who said the bracelet is an effective reminder to move away from complaining.

A table full of first graders said they never complain, but one said the bracelet makes her feel thankful and another added that it has two languages, English and Latin.

“St. Peter, Rejoice in the Lord” is etched on one side; the reverse side reads, “Ad Majorem Dei Gloriam” (For the Greater Glory of God).

Giving glory to God is an important part of the Advent journey at Saint Peter’s. More than 45 students have joined the school’s Saint Anthony Club, which makes sandwiches for individuals served by the Cathedral Kitchen in Camden.

“Helping others prepares us for Christ’s birth,” said Sophie Holliday, a sixth grader.

Saint Peter’s isn’t alone. Throughout South Jersey Catholic Schools, communities are preparing for Christ’s birth by serving others with food, warm clothes and other necessities, toys and the gifts of music and companionship.

Holy Angels students took to the streets of Woodbury to sing Christmas Carols at an elderly care center. Saint Vincent de Paul School in Mays Landing spread cheer by making cards for shut-ins and those on the school’s daily intentions list.

Thursday is Give-day at Christ the King School in Haddonfield, where students bring in a variety of items used to create care packages for others.

Sponsoring families is another way schools are spreading Christ’s love at Christmas. At Saint Mary’s in Williamstown, each grade adopts a family, making sure Santa finds his way to many in need. The student council at Saint Teresa’s spearheads a similar effort in Runnemede.

Many schools honor veterans and active military personnel during Advent. Students at Saint Michael in Clayton wrote letters to armed services members, and Our Lady of Mount Carmel, Berlin, students brought gifts and spent time with residents at the Vineland Veterans’ home.

Teachers get into the act as well. Faculty at Our Lady of Hope in Blackwood have a food drive for families in need. A treasured tradition at Holy Spirit High School in Absecon is a faculty and staff collection that helps cover the cost of lunch for students who would otherwise go without.

No Catholic school setting would be complete without an Advent wreath. Some schools, like Saint Rose of Lima in Haddon Heights, invited families to join together to make Advent wreaths for their homes. In Gibbstown, Guardian Angels students begin every day of the season gathered around the Advent wreath. Inspired by the lessons behind each candle, students at Saint John Paul II in Stratford created Advent calendars with their intentions for spiritual growth and service in the weeks before Christmas.

Other traditions and symbols also help school communities prepare for Jesus’ birthday. The Jesse tree is decorated with symbols of Bible stories dating all the way back to Adam and Eve, tracing the lineage of Jesus. The tree at Bishop McHugh in Cape May Court House is becoming full, as students add a new decoration each day and read related Scripture from the Bible. At Cape Trinity Catholic in Wildwood, students created paper chains with acts of kindness written on each link.

Advent is a time to see and encourage goodness in others. At Bishop Schad in Vineland, a tree full of gold stars reflects that many students have been anonymously reported for showing acts of kindness. In a twist on Secret Santa, students at Saint Mary, also in Vineland, chose the name of a classmate to observe during Advent. They will write essays about the positive acts they observed, and the class will guess the student being described in each essay.

School and parish communities continue to be inspired and entertained by school pageants, plays and concerts. Students in pre-K 4 at Good Shepherd School in Collingswood have yet to perform their version of the Christmas miracle, just as accomplished high school musicians prepare for the Camden Catholic Christmas concert in Cherry Hill.

Anyone who thinks the true meaning of Christmas might be lost need look no further than South Jersey Catholic Schools. “We look forward to continuing to provide opportunities for our students to share their blessings and bring happiness to as many children as possible,” said Clare McNamee, director of Campus Ministry at Paul VI High School in Haddonfield. Who could complain about that?