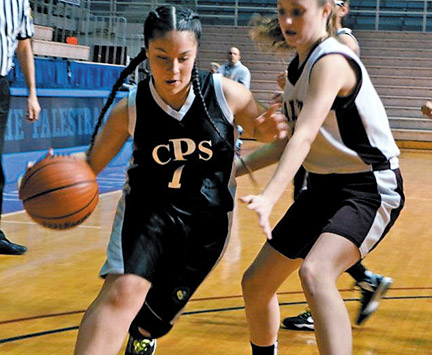 A player for the Catholic Partnership Schools (CPS) tries to drive past a player from St. Joan of Arc in Marlton.

The smoke has finally cleared from the NCAA Tournament. For weeks, a field of 68 was whittled down to one champion, the Connecticut Huskies, who took the title on Monday night.
As usual, this year’s tournament came down to the matchups. Storied schools like Duke and Ohio State were shocked with a first round exit; and schools like Dayton had their own “Cinderella Story,” upsetting teams with more household names.
Locally, another matchup is noteworthy not because of a heated competition, but rather for the spirit of cooperation and Catholic fellowship.
At first glance, these two groups are very different. The girls’ basketball team from St. Joan of Arc in Marlton, a suburban parish school with an almost 50-year history, finished the year with a 19-0 record in the South Jersey Saints League. Then there’s the Catholic Partnership Schools (CPS), a non-profit serving more than 1,000 children in five culturally-distinct neighborhood schools in Camden, which in 2013 fielded their first girls basketball team in 35 years.
Come game time, it’s all business between these young ladies. But off the hardwood, the two groups have formed a bond, creating a “Cinderella Story” of a different kind.
“St. Joan of Arc has been very welcoming in the league. They’ve embraced our players,” says Gregg Metzinger, coach of the Catholic School Partnership girls’ team. “There’s a nice comfort zone for our players, as well as the families.
“During the game we’re highly competitive, but there’s a positive connection even though we’re opponents. We’re like their younger brothers and sisters,” he said.
In addition to practicing with the newly-formed team and offering resources to help defray costs, such as entrance fees to the league and paying for the referees, St. Joan of Arc invited the Catholic Partnership Schools team on a trip to the Palestra on the University of Pennsylvania campus. The two teams held a scrimmage for the JV and varsity teams. Then the coaches, girls and their families sat down for some pizza at Houston Hall and enjoyed a Penn Quakers basketball game later that evening.
“We’ve played teams [at the Palestra] over the years, but this was the most special,” said Maria Vittese, athletic director and part-time teacher at St. Joan of Arc. “It was really a privilege to spend time with them there.”
“St. Joan of Arc has been doing what we could to help [the Catholic Partnership Schools] program. We love them,” adds Coach Mary Clare Brandt.
“When [the two teams] are together, they’re kids. There’s no difference,” says Metzinger. “They’re just a collection of kids that play basketball. At dinner, they acted like seventh and eighth graders.
The impact this trip has had on its participants is a two-way street.
“While they interact and see their commonality, they’re also seeing Christ in each other,” says Vittese. “Hopefully this will help [the girls] in the future and maybe take away some of the stigmas that they will be presented with.”
“When we have names and faces, when people are real to us, your opinion and your life can never be the same,” adds Sister Karen Dietrich, executive director, Catholic Partnership Schools. “You can never make the same, sometimes harsh, judgments that you make if you didn’t know somebody personally.”
St. Joan of Arc and the Catholic Partnership Schools are looking forward to continuing this matchup for years to come.
“We’re going to take this further,” says Vittese. “Seeing that someone really does care makes a difference.”
For more information on the work of the Catholic Partnership Schools, visit catholicpartnershipschools.org.

Frank Sinatra is a communications professional living in Pennsauken.