“St. Francis de Sales –Let us run to Mary, and, as her little children, cast ourselves into her arms with a perfect confidence.”
Home Latest News Msgr. McDermott, advocate for Camden residents, dies 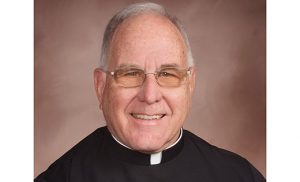 Msgr. Robert T. McDermott, a spiritual force in the city of Camden and a tireless and innovative advocate for its residents, died on Feb. 17. Bishop Dennis Sullivan celebrated the funeral Mass Feb. 23 at Saint Joseph Pro-Cathedral in the East Camden neighborhood where the priest had grown up and where he later found his life’s work and the greatest fulfillment of his ordained ministry.

As a young priest he spent several years on the faculty of Camden Catholic High School in Cherry Hill, and he remained loyal to the school throughout his life. Last year Camden Catholic dedicated its collaborative learning lab in his name, and the school’s president emeritus, Msgr Andrew Martin, was the homilist at the funeral Mass.

After serving as parochial vicar at Saint Luke Parish, Stratford, for two years, Msgr. McDermott became pastor of the Pro-Cathedral Parish in 1985, a position he held until his retirement on Oct. 1, 2014.

When Msgr. McDermott returned to minister in East Camden, the neighborhood had significantly deteriorated since the days of his childhood. The new pastor found an area filled with abandoned buildings, including an entire row of vacant and burned out homes directly across the street from his church.

In his first year as pastor, a parishioner — a Vietnamese refugee — needed help finding adequate housing for his large family. That initial need led to Msgr. McDermott founding the Saint Joseph Carpenter Society, a non-profit housing project that to date has created nearly 1,000 homes.

But the Carpenter Society was about more than buildings. “Homeowner” and financial training became integral to the organization’s mission.

The priest was “Father Bob” to everyone, and he was widely respected as a leader with vision and a knack for finding resourceful individuals to help give those visions shape and handle day-to-day problems and challenges.

“He was able to recognize and call forth the gifts in other people,” said Sister Veronica Roche, SSJ, who worked for years as a pastoral associate at Saint Joseph Pro-Cathedral. “He had the vision, and he was always able to find the right people to just go with it.”

She recalled he often said, “Money follows ministry. If there is a need, you’ll find the money.”

Responding to those needs at the Pro-Cathedral resulted in a revitalized parish school; the Child Development Center; LUCY (Lifting Up Camden’s Youth) Outreach; and Romero Center Ministries, dedicated to Catholic teaching and retreat experiences.

And, after “literally stepping over people who were sleeping on the porch of our office” and giving them sandwiches and bus fare, John Klein, a former businessman who was working at the parish, said Msgr. McDermott asked him to look into the problem of homelessness. That led to the establishment of what is today Joseph’s House, a shelter at 555 Atlantic Ave. that provides food and individualized social services for up to 80 individuals a night.

“Everyone who knew Father Bob knew he was one heck of a visionary,” said Klein, who recently stepped down as executive director of Joseph’s House. “He would always empower you to make that vision a reality.”

The spirit of the Lord is upon me;

Therefore he has anointed me.

He has sent me to bring glad tidings to the poor,

To proclaim liberty to captives.

“He lived his priesthood,” Klein said. “It was a singular blessing in his life. He gave wholeheartedly to it.”

Burial was at New Saint Mary’s Cemetery in Bellmawr. Contributions in Msgr. McDermott’s name can be made to The Joseph Fund (www.JosephFundCamden.org).