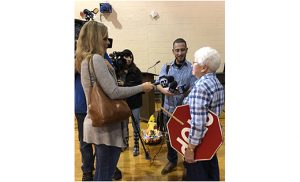 HADDON HEIGHTS — Crossing guard Elizabeth King didn’t see it coming. She expected to exit with good-byes on the crosswalk when she came to work on Friday, Sept. 28.

But the Saint Rose of Lima School community had other plans for her retirement day.

They brought “Miss Elizabeth,” who crossed children safely for 17 years, into the school for a grand send-off during morning assembly. Students presented her with nearly 300 hand-made cards, flowers and a school shirt, and school principal Deacon Joseph Rafferty declared her an honorary alum.

With her STOP sign still under her arm, King took the mic and thanked the school community.

Later, she spoke about her early days at Saint Rose and how quickly she bonded with the school community. “I remember when the eighth graders lowered the flag on Sept. 11,” she said. “It was my first week on the job.” Those eighth graders are now in their early 30s.

King retired from a 40-year career in the insurance industry to care for her mother, who suffered from Alzheimer’s disease. After her mother died, King saw an ad for the job and thought it would be the perfect way to stay busy and find purpose.

Between weather challenges and the sheer responsibility for so many young lives, she said she didn’t realize how much was involved until the job began.

When asked what separated Saint Rose from other schools where she had served as a sub, King immediately said it was getting to know the families. At other schools, she explained, students walked so the parents were never there. At Saint Rose many parents drive or walk with their children, and they always stopped to talk to King.

One of those parents was Jeff Moore. In an interview with SNJ Today, Moore said dropping his kids off at school and talking with King was his favorite part of the day. “She just was icing on the cake,” he said, referring to the school’s positive environment.

While King said she will miss the students and families, she is looking forward to sleeping late and tending to projects at home. With her 85th birthday coming in April, she’s earned it.