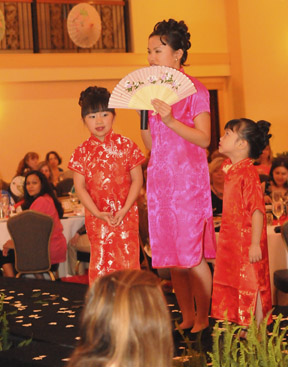 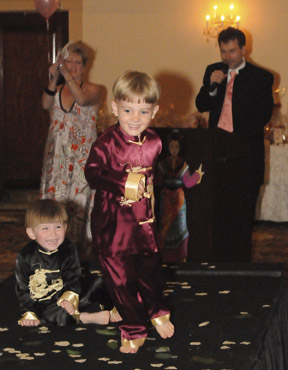 “A Night in Bangkok” was the theme of the fashion show sponsored by the PTA of Our Lady of Mt. Carmel, Berlin. It was held at Lucien’s Manor, Berlin. The students were models. 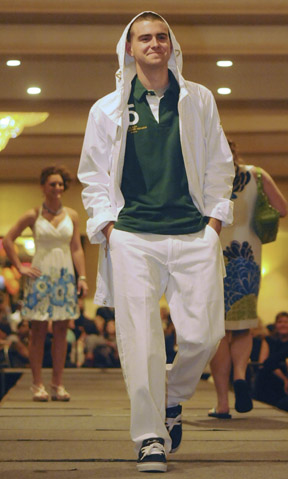 Deanne Covella was one of the adult models at the Our Lady of Mercy Academy fashion show held last month at Villa Catering, Winslow. Students also modeled.

On the runway, second-graders in their first Communion outfits smile angelically. Eighth-grade girls and boys show their poise as they model the latest styles.

High school students show their formal side as they promenade along the stage in their prom attire. Occasionally a favorite teacher, or even a beloved principal, will take center stage to make a fashion statement. 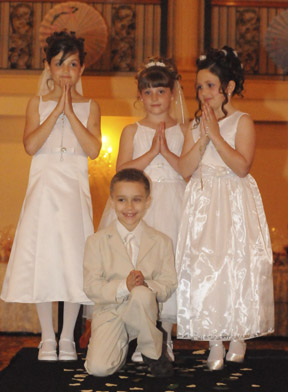 Schools across the Camden Diocese have long-discovered that an annual fashion show offers another avenue to foster community spirit while raising funds for the school.

At Assumption School, Atco, the Spring Fashion Show is one of the biggest highlights and most successful events.

For this grammar school, the 40-year tradition has evolved from a professional production to a more student-focused presentation. This year, 30 student models from pre-kindergarten through eighth grade volunteered to participate. They gave up their lunchtimes learning to walk the walk, wave the wave, and smile. They endured fittings and the latest fashion crazes. The little ones practiced hard to stay in line — in the correct order.

While the students dream of glamour and glitz, it’s simple and informal, said Jerri Stokes, who served as co-chair of Assumption’s fashion show for the past five years. But they do get a chance to bask in the floodlights. As they are introduced, the audience gets to learn a little something about each of them.

“We announce their names, their teachers, hobbies, what they like to do in their spare time,” Stokes said. “And we mention the store that provided the outfit being modeled.”

Local retailers have opened their racks to fashion show coordinators, allowing them to find clothing and accessories that tie into the theme of the show. This year, Assumption’s theme was “Luck be a Lady,” so coordinators rolled the dice and came up aces as the kids modeled their dress-up clothes. (Students have the option to purchase the clothes they model, but are not required to do so. The retailers are promoted during the show and in the program booklets.)

Across the diocese, it’s tradition for second graders to model their first Communion outfits and for high school students to show off their elegant prom gowns and tuxes. In between, it’s up to the whim of the fashion gods.

Once held in the school halls, many school fashion shows are now booked at local catering halls.

Tickets to the event are running close to $50. The net proceeds, after the cost of the facility rental and the meal, are minimal, but some of the evening’s extra offerings add fun and profit to the event.

Kathleen Reilly has served on the fashion show committees of Resurrection School and Camden Catholic High School, both in Cherry Hill.

Reilly has witnessed the evolution of the fashion show. When her children were at St. Peter Celestine School, the event showcased apparel from local retailers, worn by professional models. For a few years, parents were recruited to be the models, which was popular but required a large commitment of time.

Camden Catholic’s fashion shows, now running close to 40 years, have the tradition of highlighting its seniors. In addition to the production company’s show, seniors are selected to walk the runway in their prom wear.

“There are certain requirements for the seniors who wish to participate in the fashion show,” Reilly said. A good academic standing is at the top of those requirements. The student models represent the wide diversity of backgrounds and interests that are part of the high school’s student experience, Reilly said. This is an opportunity to highlight the accomplishments and hopes of those seniors. “It’s a proud moment,” she said.

In more recent years, the committee nixed the production company and focused more on the students. Some events brought faculty members to the runway; other events featured a set or two with professional entertainment.

What’s been gratifying to Reilly is the expansion of school and community spirit in this particular fundraiser. She said that there’s generosity — in time and material goods, from the printing of program materials to the donation of prizes for the baskets, to the commitment of time.

New traditions include invitations to the families of in-coming freshmen to attend and join other newcomers at a welcoming table, and a role for one senior to take on an internship as liaison between the fashion show committee and the school community.

What has been fun to watch have been the students, Reilly said. “Some of them are so shy when they first join in,” she said. “But they build new relationships with each other and with the parent volunteers. They see the work involved and the generous spirit of those who pitch in and help.”

Reilly said it’s the living example of giving back — which is always in fashion.