““Christmas is joy, religious joy, an inner joy of light and peace.” -Pope Francis
Home Uncategorized A reflection on the World Meeting of Families 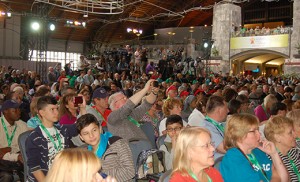 At the opening Mass for the World Meeting of Families on Sept. 22 the entrance procession lasted more than 20 minutes.

Picture it if you can. First are the Knights of Columbus: dozens of them, in full regalia. Then the cross and candles, and then row upon row upon row of seminarians. Youthful, glowing, joyful. Eventually those ranks end and are followed by a long line of priests. Paired white cassocks passing in a seemingly endless file, until they, in turn, finally give way to the pointed miters and red zucchettos of the bishops. And again it’s a long line of them, bishops beyond counting. It takes at least five cycles of the official World Meeting of Families Hymn to get through it all.

That’s just the clergy. The room, set to accommodate 17,000, is packed. It’s a moment of hope for the church.

The whole World Meeting of Families congress is. Those more than 17,000 registrants from over 100 countries around the world make this particular World Meeting the largest in the history of the triennial gathering, held each time in a different country by the Pontifical Council for the Family.

Walking into the Pennsylvania Convention Center in Philadelphia, I find the crush of people from all over the world is exhilarating. A large group from Nigeria passes, at least 20 people in matching bright green and black traditional dress. “¡Qué viva México!” two pilgrims shout into a camera while holding the Mexican flag with pride.

Wading through the center is like listening to a discordant symphony of languages. Everywhere there are men and women religious, priests in Roman collars and cassocks, bishops recognizable for the telltale chain of a pectoral cross.

Walk into the exhibitors hall and prepare to be blown over by the sheer Catholicity of it all, in all of its wonderful strangeness. Catholic Relief Services hands out fair trade chocolate bars near a booth where a man is dressed like St. Nicholas. The Knights of Columbus have built a space-age station at the front of the hall that looks like it could have its own walking tour. A Catholic artist has erected a gallery with life-size paintings for sale. At the EWTN booth a crowd gathers to watch live coverage of the pope’s landing in the U.S.

There are more than 300 vendors in that exhibit hall, Catholic organizations from across the country, each pursuing their own piece of the mission. There are too many to visit, too many pamphlets and giveaways for one logo-emblazoned tote to hold.

Can all of this sensory evidence prove the statistical evidence wrong?

The Center for Applied Research in the Apostolate found that only 4 percent of American Catholics are what they termed “core Catholics,” those who attend Mass weekly and are active participants in the life of the church. Those who, for example, would know that a World Meeting of Families is happening and would be interested in attending.

Somehow we’ve failed to capture the imagination of the dormant Catholic and fire up her enthusiasm, to show her that this is the thing she is missing, that here is the truth she’s been looking for.

But this World Meeting of Families has attracted thousands of people who are excited about the church’s mission of love. Even if it’s true that something like the World Meeting isn’t usual, the spectacle still gives me hope.

Breathless anticipation mounted around that EWTN screen in the exhibit hall Tuesday afternoon until, suddenly, the familiar white-clad figure appeared in the doorway of an Italian jet. The crowd on the TV went wild with chants of “Francisco! Francisco!”

A 20-minute processional is a drop in the ocean of time, but it inspires. Some 17,000 may just be a few grains of sand on the beach of the world, but over time they can wear down stone. A single man isn’t even a blip on the screen of humanity, but one named Francis has captured the hope of the world. And soon he’ll be in our midst. Think of the ripples.