“St. Francis de Sales –Let us run to Mary, and, as her little children, cast ourselves into her arms with a perfect confidence.”
Home Catholic School News In Italy, a warm welcome for high school group 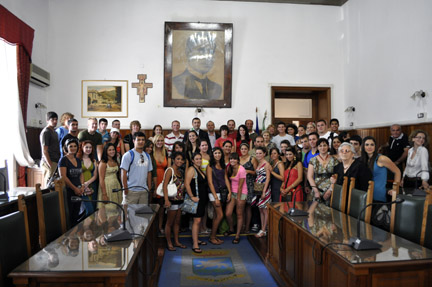 Students and chaperones and faculty from St. Joseph High School, Hammonton, gather for a photo in the mayor’s office in Sarno during their trip to Italy this summer. The mayor is a relative of Michael Falciani, one of the faculty chaperones.

Thirty five students and five faculty chaperones from St. Joseph High School, Hammonton, traveled to Italy this summer, where they visited St. Peter’s Basilica, the tomb of St. Francis in Assisi and Pompeii.

The trip also included a journey south to the small hilltop town of Sarno. A few of the local residents, all relatives of Michael Falciani, one of the faculty chaperones, have visited Hammonton in the past, but none of the American members of the family have been to Sarno.

The group was greeted by a large group of people waiting on the steps of the local church, which was built in 1628. The pastor gave the St. Joseph group a tour of his church and then they were off to meet the mayor.

They walked to town hall as people along the street greeted and waved to the group. Once inside the council chambers, the mayor welcomed them warmly, and the Hammonton group presented him with a St. Joseph High School shirt.

After telling the group about his pride in his town, the mayor invited the group to lunch at a local restaurant where they were all treated to a feast, all courtesy of the town of Sarno.