“St. Francis de Sales –Let us run to Mary, and, as her little children, cast ourselves into her arms with a perfect confidence.”
Home Latest News Mason jar preserves voices from the past 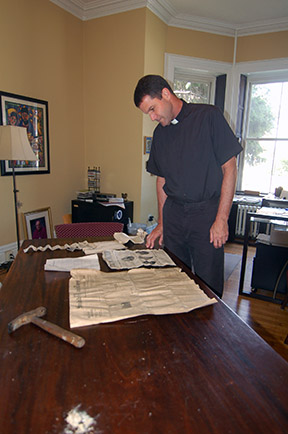 Father Matthew Hillyard, OSFS, rector of the Cathedral of the Immaculate Conception Church in Camden, looks over newspapers and other items found in the time capsule taken from the former convent at Seventh and Federal streets. He had to use the hammer in the foreground to open the container, a Mason jar, that had been in the building’s cornerstone since 1908. See more (story/photos) of the building in Latest News: “Long after the school closed, the building comes down.”

CAMDEN – Two World Wars, 19 U.S. presidents, 18 popes, and 12 diocesan bishops separate the years 1908 and 2014.
Last week, the past and the present, 106 years apart, connected amidst the demolition of the former school/convent on the corner of Seventh and Federal streets here in Camden.
Before Hargrove Demolition began their work, men in hard hats chipped away at the cornerstone of the building and found a glass Mason jar, caked with limestone and dirt.
Removing it from its resting place, where it had been since 1908 when the building was constructed, the workers presented the jar to Father Matthew Hillyard, OSFS, rector of the nearby Cathedral of the Immaculate Conception Church.
Opening it, Father Hillyard found three newspapers from 1908; a 1905 jubilee celebration program; a list of contributors to the construction of the school/convent; and a 1908 letter from Rev. Dean B.J. Mulligan, then-pastor of the Cathedral of the Immaculate Conception.
The letter from Rev. Mulligan, dated July 1908, notified its recipient that “The Corner-Stone of the new Convent-School at Federal and Seventh Streets, will be laid Sunday afternoon, July 19, 1908, at 4 o’clock. You are cordially invited to be present. The new building has become a necessity by reason of the over-crowded condition of our present school.”
The overcrowded school was St. Mary’s Grammar School. With the new building, the school, cathedral and lyceum (which included an auditorium, library and billiard room) filled the block that had as its borders Broadway, Federal, Seventh and Market streets.
Rev. Mulligan further wrote that “more room being needed for the healthful accommodation of the children it was deemed best to convert the adjoining convent into school rooms, thus providing ample room for present and future needs at a saving … while the building itself is material, it stands for Christian education and all that means to home and country. The faith of our people, the perpetuity of the Church in this country, morality, truth and the well-being of society depend on the correctness of early teaching, and the Catholic School stands for these ends with every power at its command.”
The pastor ended the letter with a plea for past students of St. Mary’s and the school community to donate to the school/convent. The names of these contributors, and their donations, were also found in the Mason jar.
From the local paper of the time, the Camden Post-Telegram, dated July 20, 1908, was a story covering the laying of the cornerstone, “Imposing Ceremony At Convent of Stone-Laying.”
The author writes that “starting from the Church at Sixth and Market streets the procession, led by a cross bearer accompanied by two choir boys carrying American flags, and consisting of the members of the Camden Council Knights of Columbus, the Holy Angels Society, St. Mary’s Choir and Children of Mary, altar boys and clergy, marched down Broadway to Federal; thence to the site of the new building.”
After the ceremony, the article continued, Rev. Monsignor John Brady, of South Amboy, spoke to the clergy and faithful gathered, giving a sermon on “Christian Education.”
The piece concludes by saying that “the new convent will be of Port Deposit stone, with Indiana lime stone trimmings. When finished it will present a handsome appearance and will add beauty to that part of the city.”
The two local Catholic newspapers at the time, the Philadelphia Archdiocese’s Catholic Standard and Times and The Monitor from the Trenton Diocese (which then included South Jersey), were also found inside the jar, with copies from their respective July 18, 1908 issues.
A program from the Jubilee Celebration of the 50th anniversary of the Church of the Immaculate Conception, dated 1905, was also included in the time capsule.