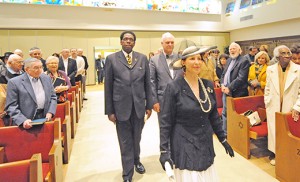 I thought I would share with you two local ecumenical and interreligious events that took place in the past two weeks here in the Diocese of Camden. This past Friday, Bishop Dennis Sullivan attended the Father Thom Schiavo Ecumenical Service at Beth El Synagogue in Margate. Jews, Catholics, Protestants, Muslims, even a group of young Latter- Day Saints missionaries attended this ceremony.

Bishop Sullivan is the fourth bishop of Camden to attend this annual service that recognizes leaders in our local area for their contributions in government, religion, humanitarianism and community service. Bishop Sullivan presented the Father Thom Schiavo Brotherhood Award to Atlantic City Mayor Don Guardian.

Father Thom Schiavo was a priest of the Camden Diocese who was assigned to the former Blessed Sacrament Parish in Margate back in the 1980s. He befriended the local Jewish leader, Rabbi Aaron Krauss, from Beth El Synagogue. Father Thom’s grandmother was part Jewish. Father Thom died suddenly at the age of 37. In his memory Rabbi Krauss and then pastor of Blessed Sacrament Parish, Msgr. Bernie Hewitt (of happy memory) instituted the Father Thom Schiavo Brotherhood Award.

Bishop Sullivan in his remarks at the ceremony thanked Rabbi Krauss and noted “all the good work and spiritual leadership that Rabbi Krauss has rendered for many years here in Atlantic County.” He also made reference to the importance of this year’s annual event bringing together Jews, Muslims and Christians, as the Roman Catholic Church celebrates the 50th anniversary of the Second Vatican Council’s promulgation of the Declaration on the Relation of the Church to Non-Christian Religions, commonly referred to as “Nostra Aetate,” “In Our Time.”

In presenting the award to Mayor Guardian, Bishop remarked that “his love and respect for all the people (of Atlantic City) comes from his upbringing and training in the Catholic faith and the continued spiritual nourishment that he derives from his active membership at St. Nicholas of Tolentine Parish in Atlantic City.”

The other interfaith event took place on April 28 at The Mansion Pavillion in Voorhees. It was sponsored by the Jewish-Catholic-Muslim Dialogue of Southern New Jersey. The program titled, “Realities In The Holy Land,” was a conversation with Dr. Gershon Baskin. Over 250 people gathered for the presentation that was followed by a rather lively questions and answers portion. Dr. Gershon Baskin is a renowned peace activist, award winning Middle East journalist and was part of the negotiation team to bring Israeli IDF soldier Gilad Shalit home. He is the founder and co-chairman of IPCRI — Israel/Palestine Center for Research and Information, dedicated to the resolution of the Israeli-Palestinian conflict on the basis of “two-states for two peoples” solution. He is a social and political activist and a researcher of the Israeli Palestinian conflict and peace process. Dr. Baskin is a columnist for the Jerusalem Post and holds a doctorate in international relations from the University of Greenwich.

It was through secret back channels that he helped the Israeli government dialogue with Hamas in order to achieve the release of Gilead Schalit. He became the unofficial intermediary between senior Hamas officials and Israeli envoy David Meidan. Baskin’s main interlocutor in Hamas was Deputy Foreign Minister Dr. Ghazi Hamad. Baskin’s efforts are detailed in his book “The Negotiator — Freeing Gilad Schalit from Hamas.”

Dr. Baskin held the attention of the audience for a good two hours, regaling them with his perspective on the truth of the situation in the Middle East. He presents a compelling view based on his historical understanding of the background of the Middle East that has led to the present situation for both Israel and Palestine. He shares a number of personal stories mixed with the stories we read about in the paper every day concerning the fears and aspirations of all involved in the struggle to live peacefully. He shows the futility of following the same pattern of behavior by both governments and expecting different results. He challenges leaders of both governments to change the algebra of the region.

It was refreshing to hear a speaker who lives in the midst of the conflict between Israelis and Palestinians who is willing to offer new approaches based on dialogue and peace-taking risks.

The prophet Isaiah and the Suffering Servant

New efforts toward the evangelization of all Christians

The 4-year-old, the Sharpie, and the expensive table