“St. Francis de Sales –Let us run to Mary, and, as her little children, cast ourselves into her arms with a perfect confidence.”
Home Latest News Feast of Santo Nino de Cebu 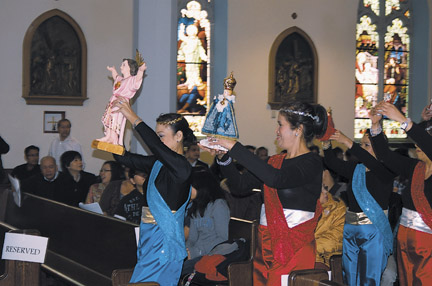 The feast of Santo Nino de Cebu, the Filipino representation of the Holy Child Jesus, was celebrated Sunday, Jan. 29 at the Cathedral of the Immaculate Conception in Camden with a Sinulog event.

Some 250 Filipino Catholics, belonging to the Santo Nino Family Devotion Ministry of South Jersey, were in attendance for the liturgy, celebrated by Father Jerry Gomez, spiritual director of the ministry. The Mass was celebrated in English and Tagalog, the national language of the Philippines.

After Communion, there was a blessing for the new Hermanos and Hermanas (“brothers and sisters”) who will lead the ministry for the next two years.

The festival marks the time in 1521 when the Santo Nino de Cebu was first brought to the Philippines as a wooden image by the explorer Ferdinand Magellan, who gave the image to Queen Juana as a baptismal gift. Forty-four years later, in 1565, Spaniards set fire to the town of Cebu, destroying everything but the image of Santo Nino. Today, the Holy Child is an example for Filipinos to emulate the virtues of humility, patience and simplicity.

The word “Sinulog” comes from the Cebuana adverb “sulog,” which means “like water current movement;” the word describes the forward-backward movement of the Sinulog dance, which consists of two steps forward and one step backward. In Sinulog dances, the coming of the Spaniards, and the presentation of the Santo Nino to Queen Juana, are dramatized.