“St. Francis de Sales –Let us run to Mary, and, as her little children, cast ourselves into her arms with a perfect confidence.”
Home Latest News Full of Grace – Msgr. Richard Callahan 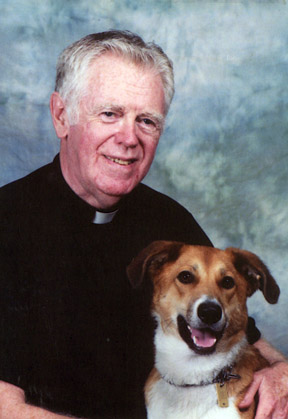 Tall, red-headed, with a calming voice and firm faith, Msgr. Richard Callahan was “a real shepherd of his people,” said his sister, Peggy Crowell.

For 50 years, Msgr. Callahan served the Diocese of Camden, respected by clergy and laity alike for his personable nature, and his commitment to parish work and administrative offices.

Msgr. Callahan held a number of administrative positions in the diocese, including time as secretary to both Bishop Justin McCarthy and Archbishop Celestine Damiano (1959-66); spiritual director of the Cursillo movement; director of vocations; and moderator of the Diocesan Parent Teacher Association.

He served as pastor of St. Aloysius, Oaklyn, and then St. Cecilia, Pennsauken, before becoming pastor of St. Rose of Lima in Haddon Heights in 1979.

In addition to his passion for the people, Msgr. Callahan enjoyed watching the Philadelphia Eagles every Sunday, along with traveling and playing pinochle.

A dog lover and owner, his favorite was Barney, a short-haired collie. As Barney’s birthday was Feb. 14, every Valentine’s Day Msgr. Callahan would throw a pizza party for St. Rose of Lima school students and bring his canine around to each classroom.

Researched by Peter G. Sánchez and James A. McBride