“St. Francis de Sales –Let us run to Mary, and, as her little children, cast ourselves into her arms with a perfect confidence.”
Home Latest News iPad interaction leads to personal connection 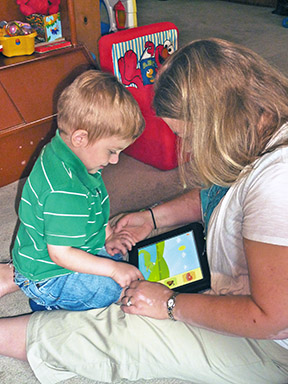 Jennifer Bush helps Gavin Wieland, who has autism, work on an iPad in the Child Development Program of Our Lady of Lourdes Medical Center, Camden.

Call it a mother’s intuition, but at just 17 months old, April Wieland knew that something wasn’t quite right with her son, Gavin.

“He had these things that he would do all the time and I started seeing how repetitive his behaviors were. He was very anti-social and didn’t want to interact with other children,” says Wieland, a Cherry Hill mother of two. “We would have play dates with other kids and he would take his trains or cars and go into another room to play by himself.”

Because of Gavin’s unresponsiveness, the Wielands thought he could have a hearing problem.

“I would talk to him and he wouldn’t respond back, so I thought there may be something wrong with his ears. And then I started keeping a journal of his behavior and researching normal behavior for children his age. I came across a bunch of Autism Speaks videos on YouTube and after seeing the behaviors of other children his age, I thought ‘I think my son has autism.’”

The facility that performed the hearing test gave Wieland a pamphlet for the Southern New Jersey Early Intervention Collaborative, which helps children with developmental delays or disabilities.

After five months had passed and little to no improvement had been made, Wieland called Early Intervention to assess Gavin to see if he qualified for services, which he did. Soon after, the family met with a neurologist who diagnosed him with autism.

In March, Gavin began meeting with Lourdes Early Intervention teacher, Jennifer Bush, for one hour twice a week. Bush is a behavior specialist and has been working with children with autism for 12 years.

For two months, the reception from Gavin wasn’t warm.

“In the beginning, he was difficult to get engaged,” says Bush. “He didn’t really want to come near me to play with toys; he didn’t want to interact with me very much at all.”

But in May, when Bush introduced the iPad — a donation from Lourdes Health Foundation Board member Brad Bono — into their weekly sessions,  things started to turn around.

A month prior, Bono, whose son has autism, donated six iPads to the Child Development Program of Our Lady of Lourdes Medical Center to enhance the curriculum for children with Autism Spectrum Disorders (ASD). He had experienced firsthand with his own son how effective technology is in strengthening interactive and communicative skills in children with ASD and wanted to help other children reap those same benefits.

“The iPad has worked so well for us,” says Bush. “Up until then, I had a hard time getting Gavin involved with activities, but once we started working with the iPad, it really brought him in. He began playing with me and it just made him more interested. The iPad is a nice, controlled way for him to play, and since he likes a lot of routines, this mode of learning fulfills that while working on other skills.”

Interactive technology such as the iPad has been found to improve socialization, develop motor skills, increase attention span and assist in communication in children with autism by allowing the child to use pictures, videos, symbols and language applications to communicate wants, needs and feelings.

“Children with autism take things in visually,” says Paula Rivell, a Lourdes speech therapist who works with Gavin once a week. “Auditorially, it’s too much, it’s too confusing. It just doesn’t process. That’s why these kids are so good at matching and other visual tasks.”

Gavin’s mother says she has noticed tremendous improvement in his ability to perform basic tasks since using the iPad. “The iPad helps him with little everyday things like brushing his teeth or putting groceries in the refrigerator. Things that he does in his everyday life, he is seeing through the iPad. It just made things click.”

Since working with the iPad, Bush has seen Gavin advance in a lot of ways. “One thing in particular that children with autism don’t have is called joint attention, which means they don’t understand that you see the same things that they see. So when we started using the iPad, Gavin started looking at it and then looking back up at me and smiling like he was saying, ‘Wow did you see that?’ It brought tears to my eyes because that was something we hadn’t ever seen him do before.”

Another improvement has been Gavin’s ability to get closer to people—not just emotionally but physically. “That physical proximity was something that was really hard for him,” says Bush. “Initially he couldn’t really point on the iPad, so I had to hand-over-hand help him point correctly. In the beginning, that was really challenging because he didn’t want me to help or touch him, but now he does let me help him more.”

Gavin, who is good at puzzles and using pictures to communicate, has been able to build on his developmental and social skills thanks to the iPad.

“Teaching kids with autism is really hard,” says Bush. “They are not easily engaged. Using the iPad is naturally reinforcing, and that makes it a more effective way to teach skills because they are motivated to participate in activities. I look forward to watching Gavin grow with each session.”