“St. Francis de Sales –Let us run to Mary, and, as her little children, cast ourselves into her arms with a perfect confidence.”
Home Latest News ‘It is right and just’ in sign language 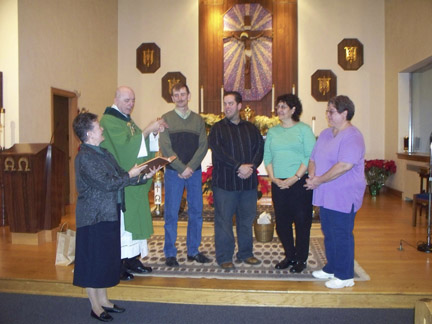 Father Brian O’Neill signs “name” in American Sign Language (ASL) while translating the phrase, “By name, you are called to serve.” He is pictured with International Catholic Deaf Association officers from 2009-11 term. They are, from left, Sister Bonnie McMenamin, Steve Finneran, Mark Fleming, Betty Ann Krumm and Gracemarie Newman.

Ever since its introduction on the first Sunday of Advent 2011, the Revised Roman Missal has been an adjustment for hearing worshippers, who now have to remember to say, “And With Your Spirit” instead of “And Also With You,” and “It Is Right and Just” instead of, “It Is Right To Give Him Thanks And Praise.”

As well, the changes in the Mass have also been felt by the Deaf Community, and those interpreters working with them.

For the past two years, the Office of Ministry With the Deaf, interpreters, and members of the Deaf Community, have met to devise ways to help the Deaf and hard of hearing in the Camden Diocese understand the changes, and how to interpret the liturgy for them in a seamless, visual way.

For interpreters, that means understanding not only the audience responses, but the priest’s revised words during the mass.

In the state of New Jersey, there are approximately 850,000 people who are Deaf, or hard of hearing, explains Sister Bonnie McMenamin, SSJ, co-director of the Camden Diocese’s Ministry With The Deaf.

In interpreting the Revised Missal, those working with the Deaf and hard of hearing familiarize themselves with liturgical and theological definitions, and attempt to convey the “full concept of the prayer itself,” said Kate Slosar, co-director of the ministry.

In some instances, translations are difficult to come by. As there is no sign for the word “consubstantiation,” or “begotten,” both used in the Nicene Creed, interpreters look at the entire meaning of the particular phrase in the Creed where the word is included, and often it takes three signs to interpret one English word.

Sister Bonnie, Kate Slosar and others working with the Deaf have held workshops and meetings with the community to address the changes, and help the Deaf community be prepared for the revisions. It is important that the Deaf members of the church understand the meaning behind the English words so that the correct sign can be used to convey the theological concept.

In ministering to children who are Deaf, it is important to include their parents, as well, in the conversation. In those instances, “it is important to minister not only to the deaf (child), but to the whole family,” Sister Bonnie explained.

In addition to workshops and meetings, during Mass, there has been a “Vlog” (video blog) set up in the sanctuary, with signing and captions, to aid the Deaf community so that they can actively participate in the Mass and respond to the priest.

Slosar and Sister Bonnie say that the meetings have “empowered the Deaf to understand that as baptized members of the church they are called to actively participate in the celebration of the Eucharist.” Both acknowledge that there is still a need for “ongoing education and discussion” so that the Deaf will have a better understanding of the liturgy. A lot of practice, practice, practice.”