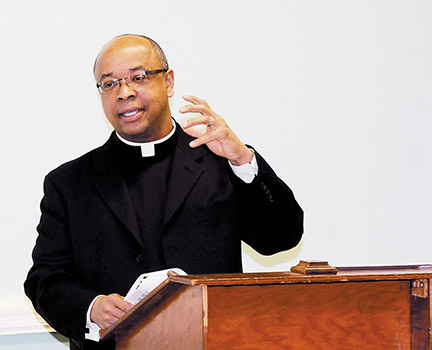 Black Catholics came together Nov. 17 at Emmaus Catholic Community in Mount Ephraim for a Day of Reflection, to discuss and implement the 10 key points discussed at last summer’s National Black Catholic Congress XI.

More than 2,200 participants — including bishops, priests, deacons, men and women religious, laypeople and youths — represented dioceses from across the country at National Black Catholic Congress XI held in Indianapolis in July.

The congress was founded in 1889, and met several times until the late 1890s. It did not meet again until 1987 in Washington and has met every five years since then.

In Mount Ephraim Nov. 17 Father Stephen Thorne of the Archdiocese of Philadelphia, the special assistant for the preparation and implementation of the 11th Congress’s five-year plan which will guide Black Catholics in ministry and action during the next five years, delivered the keynote address.

Afterward, participants split into five groups and discussed the 10 areas in which the Congress’s African-American Catholics called upon each other, and the broader church, to engage the faith: the Holiness of Life, Life and Dignity of the Human Person, Walking with the Saints, Engagement in Parish Life and Evangelization, Being Informed in Faith, Schools, Reaching Out to the Next Generation, Vocations, Getting Married and Staying Married, and the Social Apostolate.

“We were inspired by the pastoral plan and the very powerful words of Father Thorne. Now the real work begins,” said Corlis Sellers, associate director of Lifelong Faith Formation for Black Catholics, Liaison to the Bishop for the Black Catholic Ministry Commission, and coordinator of the Racial Justice Commission.

“The Black Catholic Ministry Commission will take on the task of implementing this five-year plan to strengthen our faith and to grow our church,” she said.