“St. Francis de Sales –Let us run to Mary, and, as her little children, cast ourselves into her arms with a perfect confidence.”
Home Sports News Paul VI Eagles baseball in playoff stretch 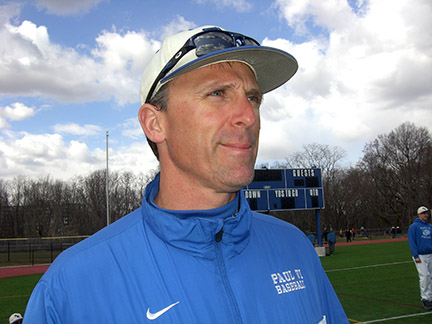 Not an easy task for fifth-year manager Pat Fisher who coached his team to 15 wins in 2012 and 20 wins in 2011, including trips to the playoffs both years. The 2012 Eagles were packed with seniors. This year is a different story as the Eagles hope to capture their third straight Division title for the first time in the school’s history.

Two key seniors missing from last year are Pasquale Petrongolo, now playing baseball at Jacksonville State and Nick Kerr at Lackawanna College. Both players had over 120 hits during their Eagles career.

“We are hoping to use the 2013 season to bond as a team in the Paul VI tradition and to be in the (playoff) mix late in the season,” the coach stated.

Fisher’s team graduated seven of the nine players in the starting lineup from 2012. That is difficult arithmetic to overcome for a baseball coach at any level of competition.

The Eagles have a well-tested group of veteran varsity players who are ready to contribute right now as they make a final push toward the playoffs this season.

“Bishop Eustace is unbelievably strong this year,” Fisher noted. “They have a legendary coach with Sam Tropiano. The Crusaders have tons of pitching, great fielders and they have guys who can hit. They are a heavy favorite in our conference.”

The Fighting Irish are also fielding a solid squad. “Honestly it does not matter what the win-loss records are when we play Bishop Eustace or Camden Catholic, those games are always intense,” Fisher said.

McKeown played on the varsity squad last year and is the leadoff man for the Eagles.  “It doesn’t matter to Coach Fisher how old you are, he just wants to see his players give an all-out effort,” said McKeown. The talented right-handed sophomore provides home run power to right-center, good base-running speed and solid defense.

“The best games of the year are when we play Camden Catholic and Bishop Eustace. No matter what the sport is, the energy we get from our fans is always raised to another level with those rivalries,” said the top pitcher on the team, Shawn Semple.

Senior Nick Gallo is a right-handed pitcher, but a left-handed hitter. A multi-sport athlete, Gallo enjoys playing baseball, but he said he also likes “the game outside the game.”

“It’s all about the camaraderie of baseball, being with my teammates after a big game. I love the fun of a victory celebration at a local restaurant with family and friends,” he said.

“One thing I have learned early in my career is that baseball is a very tough mental game and as a player you must always be thinking ahead to the next play,” Gallo noted.

One of the bright spots in the first half of the 2013 campaign is pitcher Dom Bisirri. The crafty left-handed reliever entered games in crucial situations with runners on base and was able to put out numerous fires with poise and confidence.