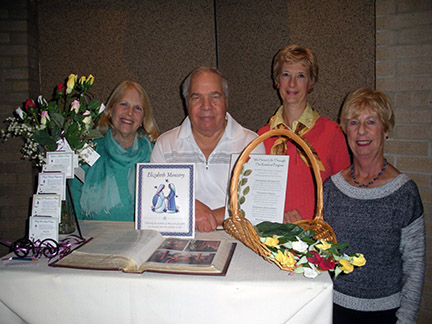 St. Joseph the Worker Parish, Haddon Township, is fostering awareness of the sanctity of life, and providing prayerful presence for families during times of bringing new life into the world, through the use of different colored silk rosebuds.
The Rosebud Program was started at the parish nearly five years ago by parish members Marie Ralbusky and Sally Howley.
A side altar consisting of a basket of silk rosebuds, a vase, tags and prayer cards was set up in the back of St. Vincent Pallotti Church. The materials were obtained through Elizabeth Ministry International, an organization whose mission is to support families during the joys, challenges and sorrows of the childbearing years. A picture of the Visitation and a Bible opened to Luke 1:39 are also placed there.
Parishioners are invited to pray daily for those who request prayer. To make a prayer request, a person selects a color-coded rosebud from the basket and a tag associated with that rose color. (One chooses a pink rosebud for pregnancy, a red rosebud for celebrating births and adoptions, a white rosebud for grieving a miscarriage, abortion, stillbirth, infant or child death, or a yellow rosebud for wanting to conceive or adopt.)
If they would like someone to contact them, they fill out their name and phone number on the tag. If they wish to remain anonymous, they only write their first name or initials. A person may make a request for a loved one and fill out the tag on their behalf.
The tag is then attached to the rosebud and placed in the vase. The person then chooses a prayer card for personal meditation. The rosebuds remain in the vase for several months; the prayers may continue indefinitely.
What are the effects? Sue Wheeler, who started volunteering shortly after the program began, says the program has been well received. The vase is always full and someone is often seen at the side altar after Sunday Mass.
Most of the rosebuds placed in the vase are from couples wanting to conceive. Some women hoping to be grandmothers have put their daughter’s names in for conception.
One eager woman put her daughter’s name in week after week. When the daughter was contacted, she said, “That’s my mom. She’s always asking for prayer for me. We just got married last month.”
The program has helped build relationships in the parish. Wheeler and Howley make phone calls to those desiring contact. The recipients of phone calls often express appreciation for the prayer support and the opportunity to chat with a caring and prayerful listener.
The volunteers have also experienced personal rewards from participating in the program.
“We always get so much more than we give,” said Howley.
Wheeler placed a rose in the vase for a relative who had been married 14 years and was hoping to conceive a child. The woman did become pregnant and gave birth to a baby girl. In talking with Wheeler about her long, difficult labor, the new mother said, “I knew that I could do it because you were still praying for me.”
Ralbusky, who maintains the side altar, says that seeing tags that were once “waiting to conceive or adopt” move to “pregnant or adopted” fills her with joy. She says her experience with the ministry has offered her many personal blessings, including a new baby granddaughter after two years of prayer.
One of her happiest experiences of the program was with a relative in her late 30s who was hoping to conceive but suffered many miscarriages.
“(She) was first on my list when we started the program…. She lost all hope of having a baby of her own.” Ralbusky said she never gave up hope and continued to pray the Elizabeth Ministry prayer each day for her and all those in the Rosebud Program. In mid-June, Ralbusky received the news that the woman, who had been adopted herself, was adopting a little boy.
Through the difficult waiting period the prayers continued, and three months later the little boy was brought home.
“We must never close our eyes to the sanctity of life,” said Father Walter Norris, pastor. “The foundation of the Gospel and our faith is built on the respect that we hold for all life – young and old, healthy and sick, good and bad. Remember to always love life.”