“St. Francis de Sales –Let us run to Mary, and, as her little children, cast ourselves into her arms with a perfect confidence.”
Home Latest News School serves as hurricane evacuation shelter 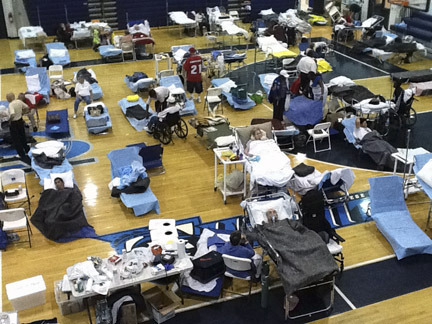 Like other Catholic schools in the Diocese of Camden, St. Augustine Prep School in Richland encourages efforts to go out into the community to serve the needy.

Last weekend, the needy came to them.

In the wake of Hurricane Irene, evacuees from Atlantic and Cape May counties, where the storm was estimated to hit hardest, took up shelter from Thursday, Aug. 25, to Monday, Aug 28, in the school’s gym and classrooms.

St. Augustine Prep was designated by the American Red Cross as an evacuation shelter for the hurricane, and eight Red Cross employees joined 60 students, 30 parents, and 10 faculty members in providing meals and care to the visitors. The Salvation Army also provided aid during the effort.

The more than 250 evacuees, arriving at the school via bus or personal transportation, were divided into two shelters, one for the general population and one for those sick who needed continuous medical care. Comfort kits of a wash cloth, toothbrush, toothpaste, comb and soap were distributed to every person.

A separate shelter was set up for evacuees’ pets. The school’s two gyms and classrooms were utilized the entire weekend.

Volunteers from St. Augustine, Red Cross and Salvation Army came together at the school starting Thursday evening, setting up registration tables, cots and medical supplies, and preparing food to the evacuees, who started pouring in later that day. St. Augustine students cooked and brought meals to the needy, while school parents who work as doctors or nurses rendered aid when called for.

By Monday night, the evacuees and volunteers were gone.

All told, 532 people took up shelter at St. Augustine during the powerful Category 1 Hurricane in New Jersey.

The weekend was “quite an effort,” said Father Don Reilly, school president. “People rallied from the (St. Augustine) community, and responded beautifully,” he said.

The Red Cross estimates that in the state of New Jersey, there were approximately 14,000 residents housed in 167 American Red Cross shelters before, during and after Hurricane Irene. Throughout the state, more than 250 staff and volunteers supported the relief operation, with Red Cross workers both from New Jersey and out-of-state.