Photos by James A. McBride 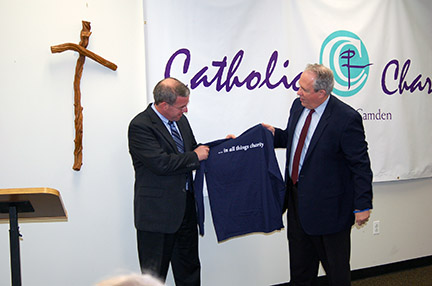 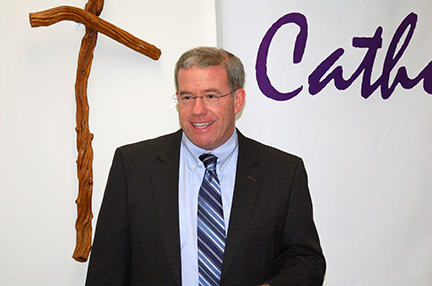 CAMDEN — On Dec. 18 the Attorney General of the State of New Jersey, Jeffrey Chiesa, visited the Catholic Charities offices in Camden to announce a $400,000 grant given to help the poor and homeless in Cumberland County.

The HPRP2 (Homeless Prevention and Rapid Re-Housing Program), the second grant of its kind, after a similar federal program three years ago, will help Catholic Charities provide homelessness prevention assistance to individuals that would otherwise be homeless, and provides rapid re-housing assistance to the homeless, in Cumberland County.

Attorney General Chiesa thanked Catholic Charities for the “tremendous job of helping people, at the core of its mission,” and said he came to “give funding for an organization that does wonderful work for the community it serves.”

The $400,000 will provide “help and hope for the holidays, to people,” he said.
Catholic Charities helps individuals and families “who don’t know where they’re going to live, or where their next meal is coming from,” the Attorney General said.

Fifty-one families in Cumberland County will be helped by the grant, which can be used by Catholic Charities in financial assistance, housing relocation and stabilization services, data collection and evaluation, and administrative costs.

Kevin Hickey, executive director of Catholic Charities, praised the state government for their aid, adding that both the Christie administration and Catholic Charities have the same desire, “to help the common good.”