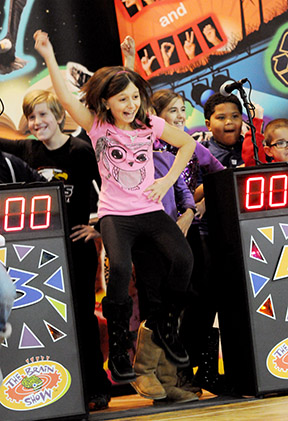 SOMERS POINT — Youngsters, and their parents, at St. Joseph’s Regional School showed off their “smarts” in February, during a program called “The Brain Show.”

Ellen A. Fletcher, the school’s advancement director, said the event was set up similar to the TV show, “Jeopardy,” where participants press buzzers to answer questions.

The students participated by answering questions standing behind three podiums. In the morning, students from K-4th grades participated and in the afternoon those in the 5th-8th grades answered the questions.

“We had a game for family members in the evening,” said Fletcher.

This was the second year in a row the PTA hired The Brain Show organization from Canadensis, Pa., to put on the program, she added.

The Brain Show organizers maintain that their program helps students to celebrate education, while communicating to children that learning can be fun.

The feel of a live TV show is enhanced with podiums that have computerized sounds and lights. And the organization can adapt their programs to a school’s curriculum with questions on topics the students have been studying.