““Christmas is joy, religious joy, an inner joy of light and peace.” -Pope Francis
Home As I See It A quiet place in the midst of joyful noise 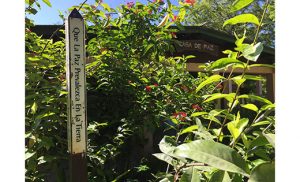 There is a quiet place in the heart of Chacraseca, a farming community just west of León, Nicaragua. It is surrounded by soaring trees and soil where nothing will grow; home to material poverty and spiritual wealth. It is fairly loud.

The air is alive in Chacraseca—whirring with the sounds of a thousand insects, roosters, barking dogs, babbling babies and crackling fires. Sometimes a truck will come bumping down the road blasting advertisements for every imaginable vegetable, and sometimes the church bells will peal so clearly they almost drown out the firework-laden procession heading to its doors.

The quiet place in the midst of this joyful noise is known as the Casa de Paz, or Peace House. It was built in the early 2000s through the ministry of Maryknoll Sister Joan Uhlen, who has since retired to New York, but whose presence is found in every corner of the Peace House and beyond. Today, the building functions as a retreat center for visiting groups, and a weekly meeting place for local leaders. It is flanked by a meditation garden, Stations of the Cross and a labyrinth of shrubs.

I recently spent four months in Chacraseca and the Peace House, working with a nonprofit, JustHope, overseeing their many groups of American volunteers who come down for a week at a time to hold medical and dental clinics, music camps and construction projects. Groups would spend their mornings working hard on their particular project, and the afternoons were for educational and cultural activities. These were my favorite. Each week, the groups got to meet key members of the community, who I was blessed to get to know through regular interaction.

I felt God everywhere in Nicaragua—not just in the soaring León Cathedral (largest in Central America!), but in the hearts and hands of the people.

There was Juan Pablo, bus driver for each group and lead singer in his church’s band. One night mid-trip he drove home to Managua to play at Mass — several hours away —and was back the next morning before the group arose for breakfast. Or the time his family surprised him on Father’s Day by showing up at the Peace House, making that same long drive for a brief visit, bearing rice, soda, cake and infectious love. We sat on the porch and played music, no translator available that late except for me, but none really needed.

There was Ileana, a local craftswoman who rose out of crippling depression after the death of her infant son by creating jewelry and sharing her story. The Lopez family, who create pottery using centuries-old techniques and welcomed every group with unshakable pride and kindness. The community of La Flor, in the mountainous Matagalpa area, who told my organization that the first project they wanted was to build a church, and that everything else was secondary.

If you want to get anywhere in Leon, you will first need to know where the major churches are, since the address will likely direct you to go a block and a half north or west from La Recoleccion, El Calvario, or San Francisco — the major colonial churches that dominate the landscape. Their religiosity is apparent, as deeply cultural as their valuation of community and family above all else.

For a short time, I became a part of that family, by virtue of my ties to an organization which had been working there for several decades. I came with the intention of learning Spanish, doing work I loved and seeing a new place for the first time.

I did all these things, and left with both deeper understanding and endless questions. Going to Nicaragua reaffirmed for me that the path that I’m taking in life is the right one, urging me ever toward making noise to get to peace. I will be forever grateful.

Catherine Buck is a freelance writer and part-time lecturer at Rutgers-Camden, where she is also enrolled in the MFA creative writing program.

Jesus taught that love was the greatest commandment