“St. Francis de Sales –Let us run to Mary, and, as her little children, cast ourselves into her arms with a perfect confidence.”
Home Arts & Media News ‘Love’ in Latin and Spanish, and colorful aluminum 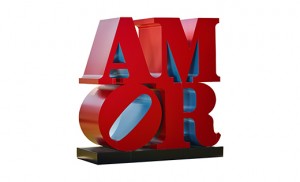 To honor Pope Francis on the occasion of his visit to the United States, the Philadelphia Museum of Art and the Association for Public Art (aPA) installed Robert Indiana’s sculpture AMOR (1998) on the Museum’s East Terrace, where it will overlook the celebration of the Papal Mass on Sunday, Sept. 27, which culminates the World Meeting of Families 2015.

AMOR—meaning “love” in both Pope Francis’s native Spanish and in Latin—will stand at one end of the Parkway facing, at the other end, Indiana’s renowned LOVE sculpture on John F. Kennedy Plaza.

AMOR was unveiled Sept. 22 before the start of the World Meeting of Families Congress.

Robert Indiana originally conceived the celebrated LOVE image in 1965 through a series of paintings, and a year later in 1966, conceived his editions of LOVE sculptures.

He created the Latin/Spanish version of the sculpture, AMOR, in 1998, in response to the changing demographics of the United States and his desire to speak to his fellow citizens. The colorful 6-foot-high aluminum sculpture is on loan from the Morgan Art Foundation, courtesy of Simon and Marc Salama-Caro, who are dedicated to preserving and promoting Robert Indiana’s artistic legacy.

Timothy Rub, The George D. Widener Director and Chief Executive Officer of the Philadelphia Museum of Art, said, “In the traditional language of the Church, amor vincit omnia—love conquers all. The message underscores this historic moment for Philadelphia, and also speaks to the message of the Museum, a place that welcomes everyone.”

‘With malice toward none; with charity for all …’

Being ‘realistic’ about life, death and faith

A novel intended ‘to go to the heart of Christmas’