““Christmas is joy, religious joy, an inner joy of light and peace.” -Pope Francis
Home Latest News Those who serve, in the parish and on the streets 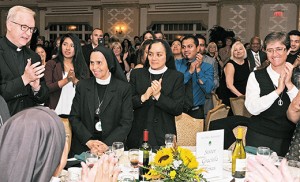 DEPTFORD — Addressing the honorees in front of the 400-plus attendees gathered here at Adelphia’s for the annual Justice for All Dinner, Bishop Dennis Sullivan beamed.

The yearly dinner, organized by the Camden Diocese’s Catholic Charities, honors extraordinary service and raises funds that allow the organization to provide direct assistance to those they serve throughout the six counties of South Jersey, be it to provide food and prescription needs, or prevent evictions and utility disconnections,.

“Catholic Charities in the Diocese of Camden is on the front lines representing the face of Christ,” Bishop Sullivan added.

Sister Graciela, pastoral associate at the Parish of the Holy Cross in Bridgeton, just celebrated her 50th year of consecrated life as a Missionary Daughter of the Most Pure Virgin Mary. At the parish, she has been a tireless advocate for the Latino community and a voice for immigrant justice and comprehensive immigration reform.

In accepting the award, she thanked her community of sisters gathered at the dinner, who are “instruments of God’s hands in a broken world, helping the impoverished, making the underprivileged and marginalized visible in today’s society.”

Before each recipient accepted their award, a short video was shown with individuals giving testimony to their works. One of the testimonials during Sister Graciela’s video was Caroline Valentino, a close friend of hers and a member of the parish pastoral council.

“She always looks out for the weakest and smallest, and helps them; that’s one of the things that I admire about her,” Valentino said.

Camden County Police Chief Scott Thomson accepted the award for his department. Since the development of the county police force, under Thomson’s leadership, the department has garnered national attention in building up Camden and its residents.

“Our police creed is ‘Service Before Self,” he noted. “The officers have created an environment of safety, being guardians and community builders to empower people to take back their neighborhood. It’s their deeds that define the relationship between the police department and the city.”

“Hopefully we can follow in his footsteps — he’s inspiring and a great example of how successful one can be,” said senior Maggie McIntyre, president of the student council.