“St. Francis de Sales –Let us run to Mary, and, as her little children, cast ourselves into her arms with a perfect confidence.”
Home Catholic School News St. Mary fourth-graders get a lesson on South Africa 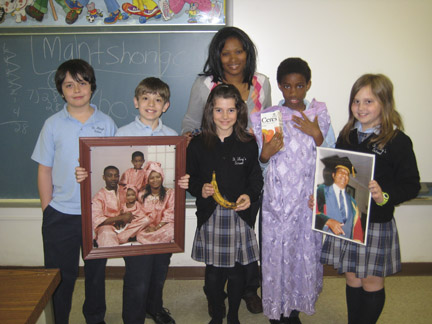 She told the children how her grandfather, Dr. Randall L. Peteni, went to the University of Fort Hare with President Nelson Mandela. The two became good friends during their time at Fort Hare and, when it came time for their graduation ceremony, Mandela did not have a cap and gown to wear, so he borrowed one from Nkem’s great grandfather.

Dr. Peteni went on to become the Chancellor of University of Transkei in the Eastern Cape of South Africa.

Ota entertained the children by teaching them the different click sound alphabet and sang a song by Miriam Makeba. She also taught them about the “Rand” or South African currency.

Ota explained how sacred traditions are to her family. She shared pictures and showed them examples of traditional garments that are worn at weddings and religious ceremonies. “It’s all about the hat. You see, the women wear very large hats and you wouldn’t want to get behind ‘those’ tall hats at church because you wouldn’t be able to see.”

Ota also spoke to the students about the Apartheid and Dutch Netherlands settlement in South Africa. It is not only black African people who live in South Africa; the current population includes 14.8% Caucasian.

Nkem Ota has family members in Maryland, Massachusetts and Pennsylvania and his father, Nkemdirim Ota, was born and raised in Enugu, Nigeria. Nkem has been to Nigeria, South Africa, Germany and England.