“St. Francis de Sales –Let us run to Mary, and, as her little children, cast ourselves into her arms with a perfect confidence.”
Home Latest News Father Timothy Byerley named pastor of Mary, Queen of All Saints, Pennsauken 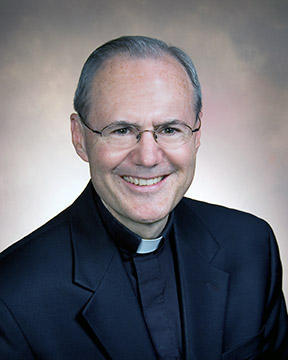 Father Byerley, 58, will continue as vice-postulator for the beatification cause of Maria Esperanza, a responsibility he has been devoted to full time since 2010.

Esperanza was a visionary and the central figure in the Marian apparitions at Betania, Venezuela, which were approved by the Catholic Church in 1987. After she died in Long Beach Island, N.J. in 2004, her beatification cause was initiated by the Diocese of Trenton.

Father Byerley knew Maria Esperanza and her family since 1994, and he has worked with the Roman postulator, Dr. Andrea Ambrosi, in attending to the legal, procedural and monetary matters related to the cause.

Father Byerley was born in Woodbury, and studied at Mount St. Mary, Emmitsburg, Md., and St. Charles Seminary in Philadelphia. He was ordained on May 25, 1985.